Rio Carnival- Listen to the beat and Smile!

One of our travel writers, Richard Yates has been at Rio Carnival this week and reports on his experience of the Sambadromo. 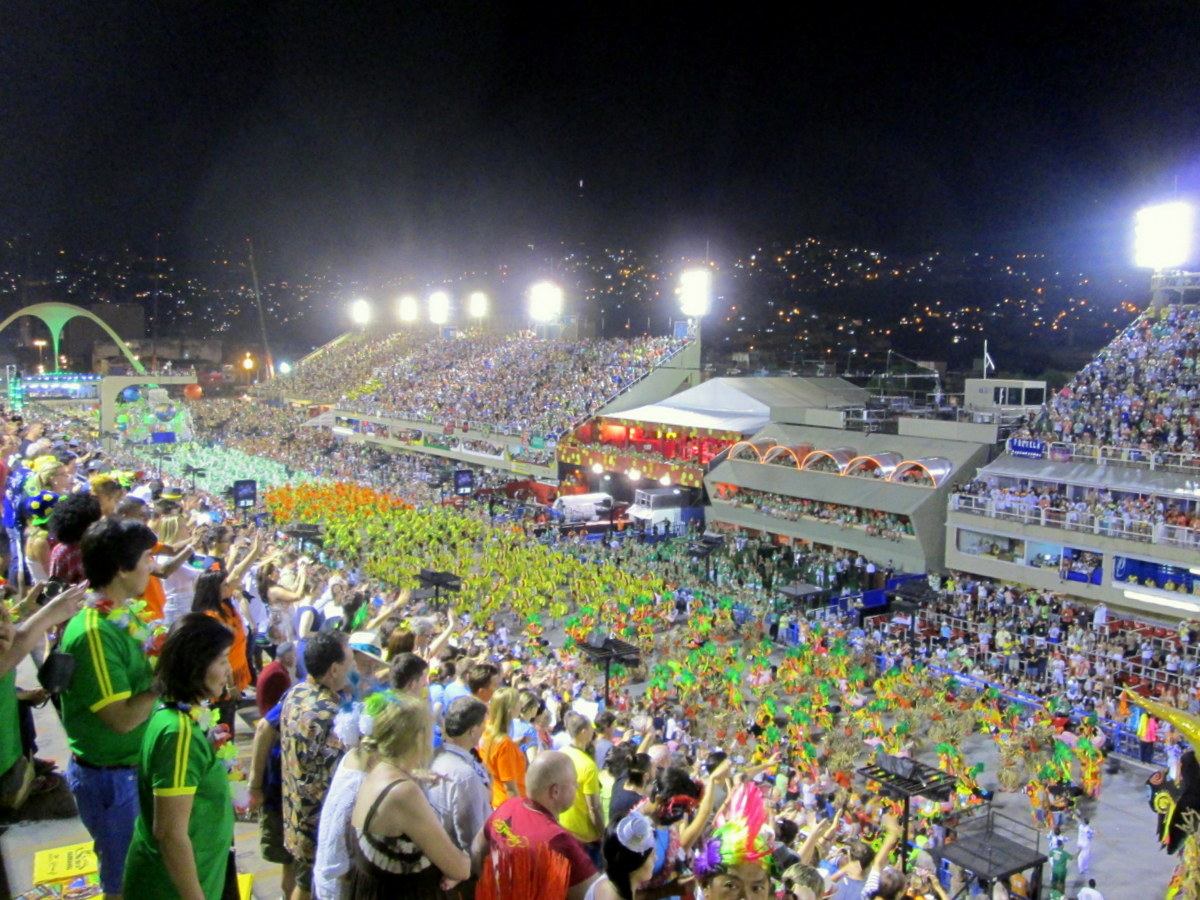 The beat is incessant, the rhythm infectious; welcome to Samba time in Brazil! You can’t help but join in, unless your feet are nailed to the earth; even staid cool Englishmen move, if only a little, a gentle shake here, a loose hip there.

I certainly had no real knowledge of what ‘Carnival’ meant here. I understood it took place over four days before Ash Wednesday and involved everyone, but imagined street parades with floats and dancers and extravagant costumes. Back when it started in 1823 it might have been, but now it is more, much more …..

Firstly there are the Blocos, street parties where seemingly anyone who can create a stand for a DJ and/or a singer, order the beer, simply has to wait for the crowds of 20-30 year olds to turn up and party, some in crazy costumes, some smeared with paint; Oh! And it needs to be next to the beach if possible. ‘Carnival’ here is a holiday and the local newspaper named 90 places where there would be a bloco.

The Samba Schools represent both ordinary neighbourhoods and favelas and are a hugely important part of the social fabric of these communities. Whilst the actual carnival parade may take a school just one hour, the work in deciding on a theme, in designing the costumes, in making them, in rehearsing – in fact the thousand and one things that go into making a successful endeavour – will start for the 2015 carnival in the next few weeks!

The Samba Schools here in Rio parade not along the streets any more, but in the Sambodromo. This unique stadium was designed by the Brazilian architect Oscar Neimeyer; completed in 1984, it is a 13 metre wide stretch of concrete, 700m long, with banks of 14 viewing stands on both sides. The Sambodromo has a capacity of 90,000 and will form part of Rio’s Olympic facilities in 2016. (For what I’m not sure!!) Each school gets an allotted start time for their parade; with over 5,000 people in each school, the timings are sensibly flexible, but you can imagine the logistical nightmare of getting the right group into the right place at the right time. The schools compete to go into the Special Group, the winner of which gains enormous prestige and kudos.

We secured two tickets for one of the viewing stands, Number 11, opposite the judges for the Sunday night. (See below) I say night because nothing starts until 2100, and the last samba school, Beija Flor, was not scheduled to start until 0350!! Start!! Not finish!! But this is Rio de Janeiro ……. 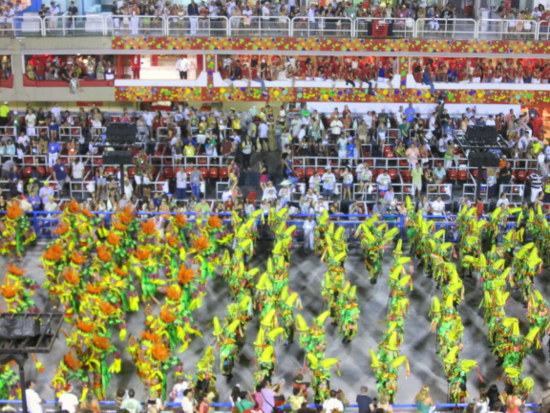 We bought tickets for a coach from the hotel and arrived at the Sambodromo rather late due to the traffic, after the first school had started. One is assaulted by noise, by the Samba beat, by people singing and sellers selling beer and soft drinks. We climbed up into Stand 11, up and up, until we stood at the very top, hemmed in on all sides by the multitude of people, mainly locals but a smattering of tourists from all over the world; there was no space left in the concrete stand to sit so we stood!. The sheer enormity of the spectacle is awesome; thousands and thousands of people, in the parade, on the stands, staffing it, security, stretching the half-a-mile down to the start. It didn’t seem necessary but to herald the start of the next school, we had 5 minutes of fireworks, cracking, whistling, banging overhead.

Each Samba school decides a theme, and the floats and dancers interpret the theme, telling the story. They say Brazil is a creative country; well, the creativity and sheer exuberance on display here is breath-taking. To the inexperienced ear, the ‘samba’ beat remains the same, only the words to the songs peculiar to the school, but the costumes, colour and displays vary so much and are simply amazing. Gradually the next parade moves along between the stands, each set of dancers showing off their outfits with a vibrancy and enthusiasm that emphasised the fun and delight that they obviously all feel, to take part in the “Greatest Street Carnival in the World”.  We felt really privileged to have seen it.

My friend has a Latin sense of rhythm and for her the sound that gets her on her feet is the sound of the drummers.These Bateria play a vital role, keeping the beat going and loud enough to be heard by the parade participants. In the Sambodromo there were possibly 300 drummers in each Bateria, creating sounds out of a huge variety of drums.

Eventually after a school called Mangueira were half way through, we decided to make our way down to a coach; it was after all 0255! We were in bed by 0400 and learned later that there was still a traffic jam around the Sambodromo at 0730. What an experience; what a night!

Whilst the spectacle of the Sambodromo was huge, electric but impersonal, one evening the previous week we had gone done to the beach at Sāo Conrado and watched the local samba school of the Rocinha favela practise. Here the bateria was 60 people …… 6 feet away! You could see the concentration on their faces, these creators of the beat, their joy at being part of such a family, the sweat; people started dancing ……. “and the beat goes on”, as they say. This is where it all starts, with a group of people wanting to dance to the samba beat.