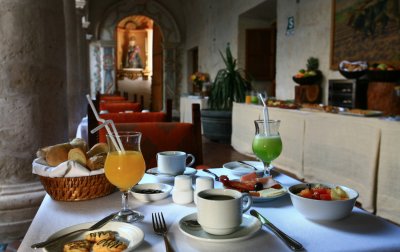 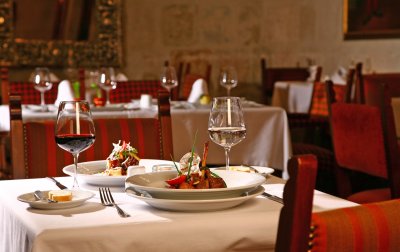 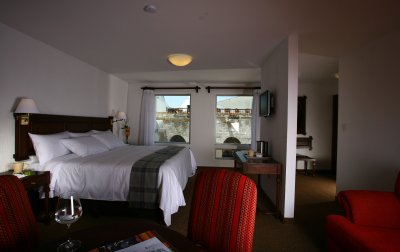 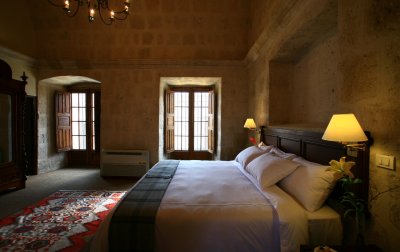 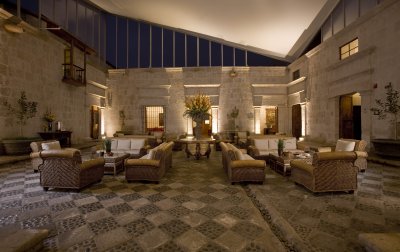 Casa Andina Private Hotel is situated in the colonial city of Arequipa in southern Peru, 190 miles west of Lake Titicaca and close to Salinas y Aguada Blanca National Reserve. Nestled in the historic quarter of the city, the hotel is located inside a magnificent building dating to the late 1700s which has been lovingly restored to its former glory. During the restoration, hidden frescos and reliefs were brought to light, and remain today for guests to marvel upon. The hotel’s 41 guest bedrooms are organised around interior courtyards, and in the grounds a small chapel and museum await further discovery!

Spacious rooms of Casa Andina Private are decorated in Andean style, a mix of traditional and modern with local textiles, exposed brick walls and panoramic vistas of the volcano. Traditional, superior rooms and suites are located on the fourth floor, featuring one king-size or two beds, flat screen LED TV, safety deposit box and tea and coffee making facilities. Each room is en-suite and offers WiFi internet access so you can stay in touch with family and friends back home.

Casa Andina Private is also home to Alma Cocina Viva - an exclusive restaurant which fuses international cuisine with authentic Peruvian dishes from the Arequipa region. Following your delicious dining experience, venture to the lounge/bar to enjoy a cocktail or glass of wine with new-found friends. Alternatively, take a walk into Arequipa’s main square and photograph illuminated city landmarks at night.

Whether you wish to stay close to the hotel, venture to national reserves or even to the coast, you can do it all from Casa Andina. Highlights of Arequipa include the Monastery of Santa Catalina, a colourful labyrinth of chapels and quarters which housed nuns throughout the 16th century, and Plaza de Arma’s Cathedral, which was constructed from volcanic rock! Intrepid adventurers who wish to venture further afield, will enjoy discovering unusual rock formations and rare flora and fauna of Salinas y Aguada Blanca National Reserve. Alternatively, drive to Puno on Lake Titicaca to discover indigenous peoples who live on South America’s largest lake.