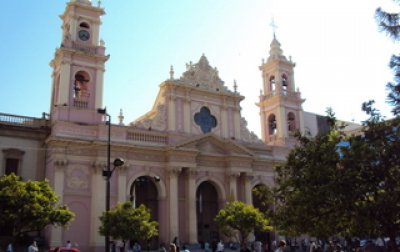 Today, the city of Salta still has a distinctly Hispanic feel to it, an urban skyline distinguished by the colonial architecture of its original buildings and churches which has also influenced more modern construction to the point where the main square (Plaza 9 de Julio) is a charming monument to neocolonial style. The streets in the old part of the town run between old Andalusian houses with their tiled roofs, thick whitewashed walls and wrought-iron balconies brightened by scarlet and fuchsia geraniums.

The tour includes a visit to the baroque Cathedral (1858) on the northern side of the Plaza that contains the images of the Christ of the Miracles and of the Virgin Mary and is strikingly beautiful. Opposite the Cathedral is the Cabildo (1783). The San Francisco Church is one of the citys landmarks with its magnificent facade and its red, and yellow tower rising above the city skyline. Other points of interest that are visited include the Catholic University and the Convent of San Bernardo, the oldest religious construction in Salta, whose front
portal was carved by Indians back in 1762, a jewel of colonial art that currently functions as the Monastery of the Carmelitas Order.

Magnificent panoramic views of the city and the Lerma Valley can be enjoyed from the top of Cerro San Bernardo. The Recently the city government has finished a painstaking restoration of the old city centre, and new restaurants have opened to add life to the austere structures after the sun goes down. The range of options for eating out has multiplied over the last few years and you can expect to find anything from the typical regional empanadas with local folk-music groups playing, to the more porteño steak and tango, or pizza and
Latin rock.

This museum was opened in Salta in 2004 and it allows visitors to fully understand and appreciate the Inca culture and heritage. The museum is located in the main square and is part of the historic centre. The big exhibit here is the display of a preserved child's
body from a sacred burial site found near the summit of Cerro Llullaillaco in the Andes Range at approx 6700 metres altitude during a National Geographic excavation in 1999. Three bodies of children that had been offered as a sacrifice to the Inca deities were found along with a fantastic collection of over 100 objects. Gold and silver statuettes, textiles and spondyllus are exhibited in the museum today. The interactive exhibition allows visitors to learn about the history, dressings, eating habits and rituals of the Inca people and their influence in the Northern region of Argentina